When I was interviewing for the job of Assistant Director of Media Communications at Common Cause 30 years ago, I was of course asked why I wanted to work there.  I responded that my head was in the clouds but my feet were on the ground, and I thought that was a good fit for the lobby group’s ideological/practical blend.  I got the job and, after a bumpy start, it was indeed a good fit.  My struggles and persistence in figuring out what was expected of me, and the organization’s persistence in sticking with me till I found my way, paid off for all of us.

I think the much younger me had it right.  I still have faith, and I still think we need to put our noses to the grindstone.  Miracles can slip away if we don’t roll up our sleeves and do our job.  Sometimes happiness wanders in unexpectedly, but frequently happiness is not easy. 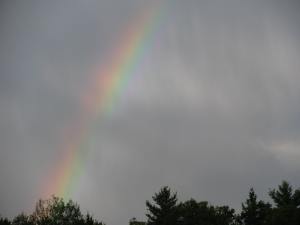 One of my favorite jokes revolves around our own responsibility to seize miracles.  In the joke, a gentleman whose house is about to flooded gets a knock on the door from the police who urge him to evacuate. ” No,” he says, “the Lord will take care of me.”  After the waters have overwhelmed the street, rescue workers in a boat again urge him to come with them to safety.  “No,” he replies, “the Lord will take care of me.”  Eventually, the flood forces him to his roof, where he’s spotted by a helicopter.  The crew tries to airlift him, but, you guessed it, he once more says no, the Lord will take care of him.  Finally, as the waters rise to his head, he cries out, “Lord, Lord, why didn’t you help me?”  The Lord’s voice booms back, “I sent you the police, a boat, and a helicopter.  What more did you want?”

From the ridiculous to the sublime … That joke reminds me of a Helen Keller quote, “When one door of happiness closes, another opens.  But often we look so long at the closed door that we do not see the one which has been opened for us.”

The wisdom in this joke has served me well for decades.  On countless occasions, when I’ve been in a situation not altogether to my liking, and started to complain, either my husband observed, or I noted myself, ” I know, I know, I made this peanut butter sandwich.”

Funny thing, though, I realize as I write this that I only ascribe that joke to non-happy situations.  I need to start giving myself credit for making something else — maybe VT cheddar and apples? — in good times!  You and I and everyone else — we make our own happy choices, and do the work required to fulfill their promise.

We can further maximize the miracles by helping others learn to be happier.  Last week, I had the opportunity to do some mediation work with Jeff Mandell, founder of the Vermont Institute on Health.  This Institute is a camp for teenagers who want to learn more about genuine well being.  Jeff is helping these kids build a foundation for a lifetime of happiness.   As you can see in his video, there are a lot of miracles at his camp — along with mindfulness and hard work.  Go Jeff!!http://www.youtube.com/watch?v=UEqOr1svOII

Happiness: A Miracle? Or Scientifically Predictable?

Comments on: "Maximizing the Happiness Miracle" (1)